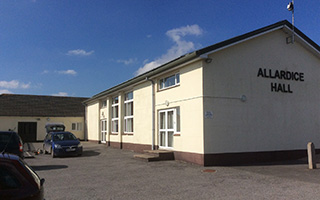 Parkham village hall, better known as the Allardice Hall, is situated on the edge of the village next to Parkham Primary School. The original hall was built in the mid 1950s, the plans having been conceived shortly after the war was going to be called the Victory Hall. However by the time funds were raised the name was not quite appropriate and the new building was named after a local family who lived in Foxdown and gave significant support to the project.

The building has been significantly extended over the years and now benefits from a main hall with stage, a small hall, a meeting room, two kitchens, two toilet areas with facilities for the disabled and a small car park.

All facilities are available for hire for members of the community and for those from outside the parish. Regular users of the hall include skittles clubs, short mat bowls club, majorettes, youth club, bingo, mother and toddler group, WI, and the local primary school who use the hall for a large variety of activities. The hall is managed on behalf of the parish by a committee of trustees who attempt to keep the hall up to date with a programme of refurbishment and improvement. The Hall has a maximum occupancy of 300 people.